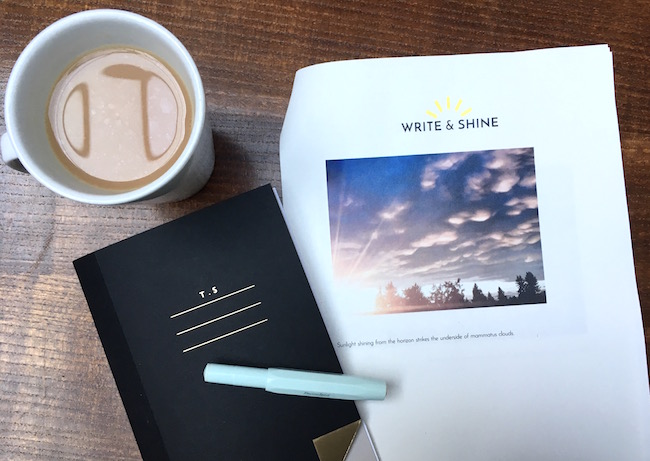 Going out of my comfort zone…

A couple of weeks I did something I was scared of… A writing workshop. I was scared for two reasons; 1. because I hate writing and have very little confidence in it, and 2. because I am not a morning person. However, despite my reservations, I decided to go along to a Write and Shine workshop because it’s always a good idea to get out of your comfort zone, however early it means you have to get up. Write and Shine are weekly, early morning writing workshops run by Gemma Seltzer, a London-based writer.

What stationery should I use?

Now, as you can imagine, the night before I had a very big decision to make. What notebook would I use?! After some hunting in my collection I decided to go for my monogrammed A5 lined notebook which was from a collaboration between Quill London and Studio Sarah a few years ago. There’s something about having your initials on a notebook…

Having woken up much easier than I’d imagine I would, I made my way to Leicester Square by the time I’d normally only just be waking up (7.30am). I was super interested to see the different crowd on the train and in London at that time of day. I found my way to Westminster Quaker Meeting House and once inside, helped myself to some breakfast of tea and croissants and got out my notebook and pen. The room in itself was pretty inspiring, with gorgeous parquet flooring, bookshelves surrounding the room, an enormous skylight flooding light into the room, and a big communal table in the middle which we sat around.

Gemma led some quick introductions around the table and kicked us off with some free writing on the subject of ‘the sky”. At this point I felt like a total fraud because I’d never done free writing before. At first I felt super self-conscious about this but soon realised it was just a way of getting comfortable with letting your thoughts out from your head and onto the page. The other thing I should note about these sessions is that you don’t share your work, which I was very relieved to find out!

Next up, Gemma talked a bit about the theme of the workshop which was going to be clouds and the sky. We talked a bit about different types of clouds and used these discussions to inspire some writing exercises. We did some character work on writing from the perspective of a cloud, and thought about people whose heads are literally in the clouds. We also then read a beautiful poem – When I Land in Northern Ireland by Colette Bryce – and analysed this as a group.

For our final activity, Gemma asked us to write on the subject of clouds and the movement of time. At this point I realised that so far, I had written exclusively in first person. I guess this is because any writing that I normally do is based on me describing something or talking about my opinion. For this reason I decided to challenge myself to writing in the third person, which I really enjoyed actually and would definitely like to force myself to do more often. It wouldn’t work here on ATS, obviously. That would be weird. But I’d like to try to take the time to sit and write in this way a bit more often.

If you’re in London, I really couldn’t recommend doing one (or more) of these workshops enough! They take place each week and you can find the dates here. It’s such a lovely way to kick off your morning, and you can feel smug the rest of the day knowing you achieved so much before most people have had breakfast (or maybe that’s just me!). There are sessions that aren’t quite so early though, with classes starting at 7.30, 8.30 or 9.15 and all lasting an hour and a half. As well as classes, Gemma offers morning writing retreats which allow you time to work on your own thing, without all the normal distractions. All sessions are £15 and include a light breakfast.

And if you’re not in London? You can still get involved as Gemma runs online classes, with 6am (UK time) prompts delivered to your inbox with ideas for exercises for you to work through. More info here.

As well as the enjoyment I got from actually spending some time writing, I couldn’t help but think that it was also a great way to get through some of my stationery stash!

4 thoughts on “Going out of my comfort zone…”