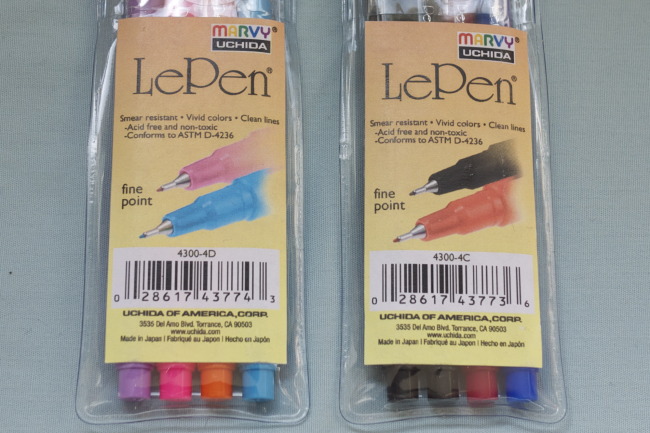 I think the thing that most attracts me to these pens is the simplicity of the design, and the fact that they’re narrow. I don’t like an unnecessarily bulky pen. 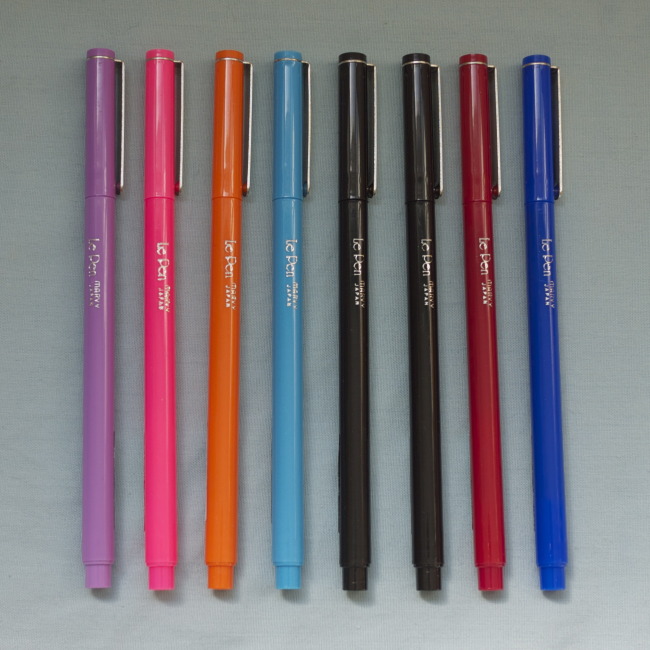 Here’s how they write, on my trusty old Moleskin. 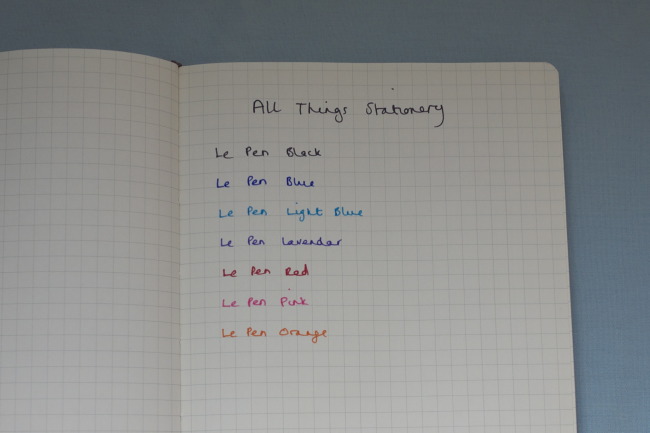 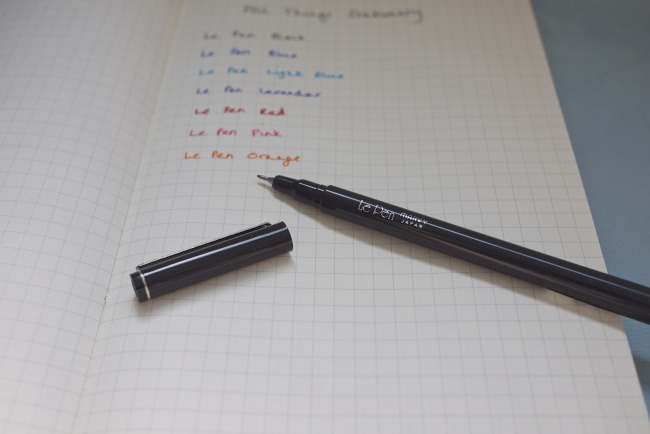 It writes really smoothly, and is really satisfying to use. The blue, black and red bleed through the page ever so slightly but as I say, only lightly, and the lighter colours don’t at all.

My usual every day pen is the Muji gel pen, which a roller ball, so when using the Le Pen I am aware that I can’t push as hard, as the nib may break. But that’s not a problem, as much as something I need to be careful about.

I think it’s definitely going to become one of my standards – big thumbs up from me!

Do me a favor, please. AT kinkos (FedexOffice) last week, I grabbed one of their logo stik gel rollerball pens. ( as close to an old Bic round stik except the nib is micro, and the nib taper a different shape. You cannot see any roller ball in the tip. Just the ink (Black). BUT WOW does it ever write the smoothest, light, heavy, non skip, non smudge, I’ve ever experienced. In the 60 + years I’ve been doodling with every pen I’ve ever owned. (and still have a sample) BUT I CAN’T DETERMINE WHO MAKES THEM AFTER 4 DAYS OF SEARCH. I just ordered a set of Le Pen by Uchida Marvy, which just may the closest. (at least from on line pictures showing the nib). If you could obtain one ( I spent $100 on the copy job so they comped me a couple) and let me know a) what you think, b) where I can get them, I would be very appreciative. I can’t wait to break it open to see if I can hack the refills into my more elegant barrels. Although I have to say, with these stiks, I’m writing clearer and faster and smaller, larger than with any pen I have otherwise ever used. Being a novice to all the pen addicts (no reference to penaddict) I’m amazed and enthralled with this pen. Thank you. Looking forward to your response. Gerry.

Hi Gerry, Sorry for my slow response! I’m afraid as I’m in the UK i won’t be able to go to Kinko’s to see what they have, but when you describe the nib, it reminds me of Berol pens that we have here. http://www.cultpens.com/c/q/brands/berol Does this look similar? These are the pens that we learn to write with in school (or we did when I was at school anyway!). Otherwise, perhaps a Sharpie pen? That’s the only other thing i can think of with a similar nib to the Le Pen: http://www.sharpie.com/en-US/sharpie-pen—fine-point-sp-00050–1 I know you can get these branded too.
Are either of these right? Good luck! Tessa

Oh, I do like to be beside the seaside…