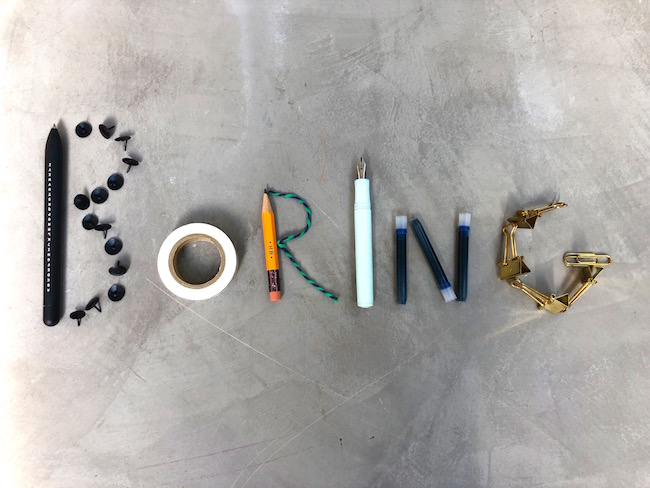 On Thursday evening I was part of an event at the British Library, connected to their current exhibition Making Your Mark. It was organised by James Ward, who runs Boring Conference, and wrote the brilliant book Adventures in Stationery: A Journey Through Your Pencil case, which I reviewed here. James asked me to come along and talk about where my love of stationery came from and although I felt completely unqualified to speak in front of everyone, I decided to say yes before I could talk myself out of it! I needn’t have been worried, it was a really nice evening and a welcoming crowd. James did a talk on paperclips, and the future of stationery in a digital world (long live the pen!) and we were also joined by Keira Rathbone, who creates incredible art using typewriters (go and see – they’re amazing!), and talked about her process.

I thought I would share my talk here, in case anyone is interested in what I spoke about (some stuff might be obvious to long time readers, so apologies!):

When I tell people what i do, I’m usually met with one of two responses:
Either people say “oh my god, I LOVE stationery”Or they look slightly confused and say “why stationery?”

It’s a question I find tricky to answer. It’s just a feeling… A love that I’ve had since childhood. For me, getting new pens, pencils, and protractors ahead of a new school year was always an exciting time and in order to think back to where my obsession came from, I started reminiscing about some of my favourite stationery items from childhood. The first being… 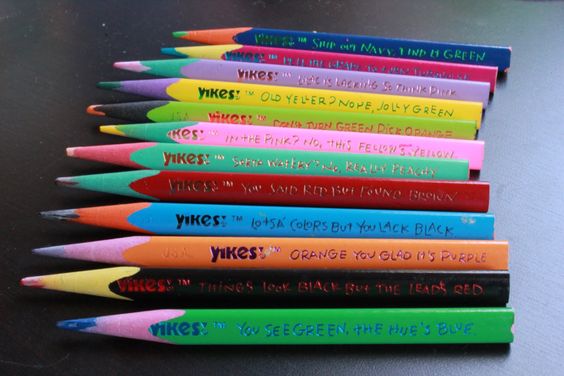 Yikes pencils. These were the pinnacle of cool if you were a school kid in the 90s, with their quirky, bright colours – they were coloured right the way through so you got fun pencil sharpenings, and zany illustrations on the packaging. 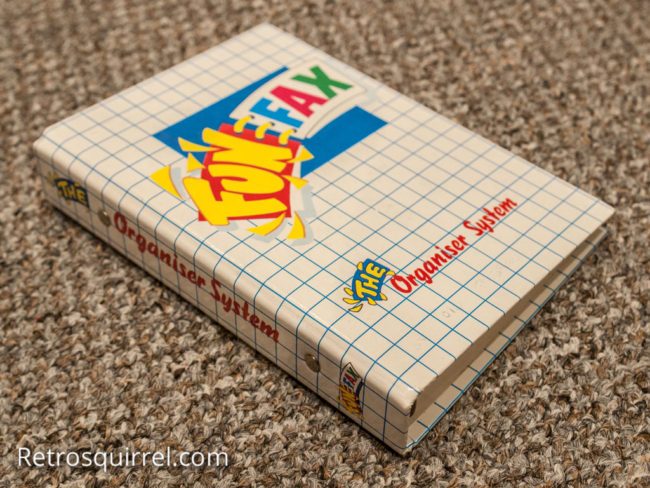 Another favourite item was my Funfax – anyone else have one of these? I wrote about this a few years ago and it’s still one of my most viewed posts to this day so I think I’m not alone in that obsession. In fact I think the grid on this cover is probably where my preference for grid paper to this day has come from. Although the sections inside were made up of games and activity books rather than diary and address book pages, this was a chance to do what all kids are weirdly in to – playing grown ups. 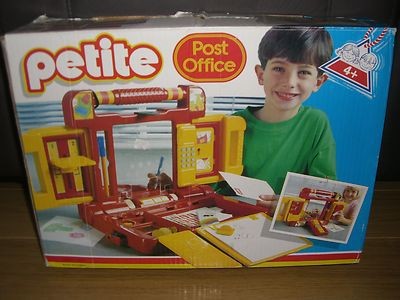 My final childhood items on this theme was a Petite Post Office. I was basically the guy on this image – having the time of my life sorting, filing, and stamping letters for my imaginary customers (because my big brother wasn’t hugely interested). It just appealed to my personality, and in fact I kind of still dream of taking over a Post Office franchise, especially after wasting hours the Peckham branches’ queue and thinking I could do a much better job.

So, using the feelings I had for these items when I was young, but in the context of being an adult in 2019, I have identified 5 reasons why I love stationery:

Reclaiming the analogue
In an increasingly digital world, using analogue tools where you don’t have to feels like reclaiming some control and like a small act of rebellion. There’s something calming about a clean page, there’s no twitter to distract you, it’s easier to focus your thoughts.

Writing or drawing the traditional way is a sensual experience – the smell of the cedar as you sharpen a pencil, the immediate feedback you feel put a pen to paper, the sound of graphite running across a page. That stuff just can’t be matched by tapping on a black screen.

Stationery = Potential
People start a new notebook when they’re starting a new project or a new job, confident in the knowledge that this time they will be organised, or they will be better at keeping a journal. Whether we actually do is neither here nor there but stationery can be used as a tool to kick things off on a positive and optimistic note.

The first thing I did when I started thinking about this talk was go to my stationery cupboard and pick out my tools. I decided to ink up a fountain pen for the first time in ages – I used Lamy AL star, inked up with Robert Oster Fire & Ice. I then needed paper that could handle ink so chose a Life exercise book. This is a Japanese brand and this paper can really handle ink.

Anyway, as you can see how it’s easy to waste time making decisions like this, but actually I think the time I took choosing tools, inking up the pen, testing paper, was useful time that my brain was starting to focus my ideas and think about what I wanted to talk about.

Organisation
You could argue that the main function of stationery is to organise and make things neater, so as a natural control freak, ultimately this makes me feel calmer.

Creativity
It also gives you the potential to be creative, put your own stamp on things, and to define your personalities and style. There’s such an incredible amount of variety. Above and beyond what you create using stationery, your choices of tools can make a statement too. It’s a way of expressing your personality at times when you have less artistic freedom, maybe at school or in the workplace. Using things other than the norm says I care about how I present myself, I don’t just make the obvious choice (yes, that’s a dig at those of you that end up using a bic biro you found in the stationery cupboard at work!)

It’s inexpensive!
As with anything, you can spend as little or as much as you want to (you can easily spend up to £400 or £500 on a fountain pen if you want, even more if you get something custom made – I mean, I personally don’t want that but if that’s your thing, that’s cool) but in general, for a shopping habit, it’s not the worst in the world as you can get a lot for your money.

I wanted to now share a few of my favourite/most special stationery items, starting with… 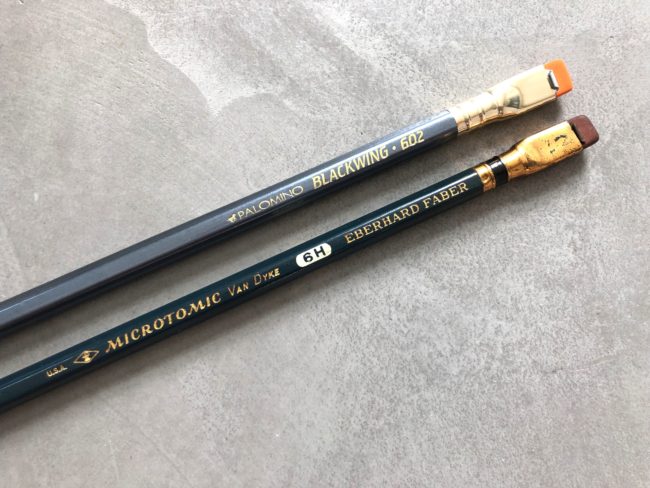 Blackwing Pencils
These pencils have a unique design where the ferrule (the bit that attaches the pencil to the eraser) is this square shape, which also allows the eraser to replaced.

The top pencil here is a modern Blackwing, made my Palomino, who started producing them in 2010, 12 years after the original factory that made Blackwings under the Eberhard Faber brand closed down.

Personally, these are one of my favourite pencils to use predominantly (if I’m honest) because of the aesthetic. I just think they are really good looking and are a bit of a conversation starter because of the unique design.

The bottom pencil in this image is I think a 1950s edition of the Microtomic, which was made by Eberhart faber and features the same ferrule as the famous original Blackwing pencils which were produced by the same company.

I’m not obsessive enough about them to trawl ebay and spend loads on an original Blackwing pencil, like some people do, but I found this pencil in an antiques shop in Paris and thought it would be cool to own a little piece of stationery history. 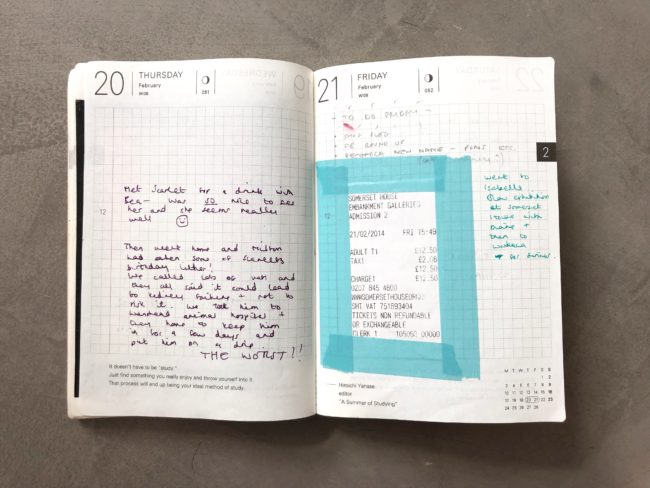 Hobonichi Techo Planner
I bought my first one of these all the way from Japan in 2014 because you couldn’t get them in the UK at that point. I had seen online that people decorated them in elaborate and beautiful ways, but I used it as somewhere between an appointments diary and a scrapbook.

It’s a pretty humble item with its black cover and understated design but really functional, with tomoe river paper, which somehow manages to handle lots of ink whilst being super thin, which allows for a page a day spread without being too thick.

This item is particularly special to me because it’s what prompted me to start this blog. I thought I’d found a cool thing that other people might like to know about, and then continued to share what other items were on my desk or I had found. I naively thought I was doing something unique but soon discovered an entire online community around the world just as obsessed with stationery as me, who were and are extremely welcoming and kind. 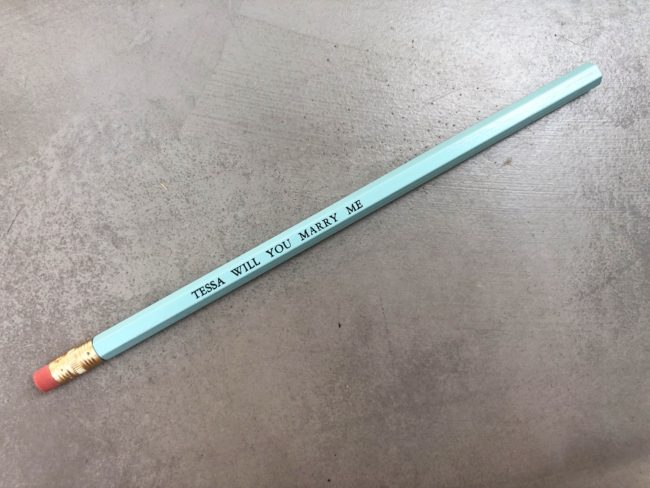 Engagement pencil
My most prized stationery possession of them all… I don’t think this needs too much explanation but it was presented to me by my then-boyfriend back in 2014.

Of course I said yes.