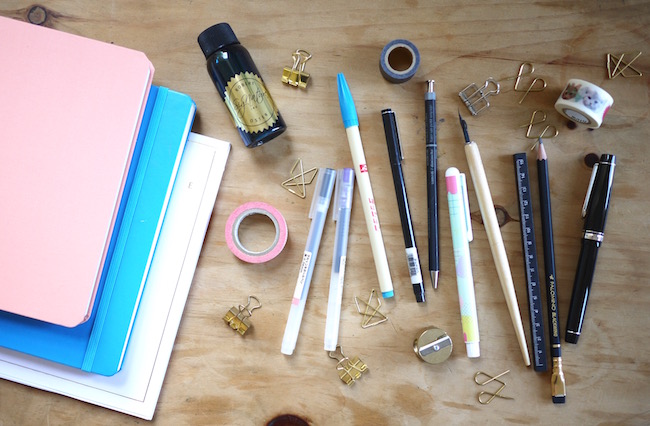 Well, I think it’s safe to say at this point that I’m the world’s least prolific stationery blogger. But thank you for sticking around, if you have 🙂 The reason, in part, for my lack of posts is that we are doing an extension on our house at the moment. If I think about it, starting this blog was what I did to fill my time after the last house renovation project finished, so it makes sense that whilst this one is going on, I’m going to be pretty useless (especially baring in mind running the shop too). BUT I’LL TRY, I PROMISE.

During the extension, we’ve moved in with some friends for a couple of months, and that means most of our belongings are in storage, including 95% of my stationery – gah! f I were a more organised person, I would have thought very carefully about what to bring, but as it’s me we’re talking about, I just grabbed things off my desk in the inevitable rush that was packing the house up. I thought it might be interesting to look at what I did grab though, as it’s probably a good insight into what I use most at the moment. You can see in the picture above, but also itemised below:

Things not included in this picture are 2 x Kaweco sport fountain pens, which live in my bag, and a load of stuff I bought along to review (I always have the best intensions, despite my lack of time, so fingers crossed!).

What would you bring if you had to make a small selection for a few months? Actually, I asked this to Brad and Myke as an #AskTPA question on the Pen Addict Podcast a few weeks ago, hear their answers here.

My name is Anuj Agarwal. I’m Founder of Feedspot.

I would like to personally congratulate you as your blog All Things Stationeryhas been selected by our panelist as one of the Top 30 Stationery Blogs on the web.

I personally give you a high-five and want to thank you for your contribution to this world. This is the most comprehensive list of Top 30 Stationery Blogs on the internet and I’m honored to have you as part of this!

Also, you have the honor of displaying the badge on your blog.

We have launched our-eshop.com to provide the world’s best quality stationery and printing services in the United Arab Emirates (UAE), at your doorstep. We have notebooks and journals that will immediately make you want to put pen to paper. They also shave confetti bombs, ribbon tags, and rubber stamps; notebook heaven looks like this! buy online printing gadgets