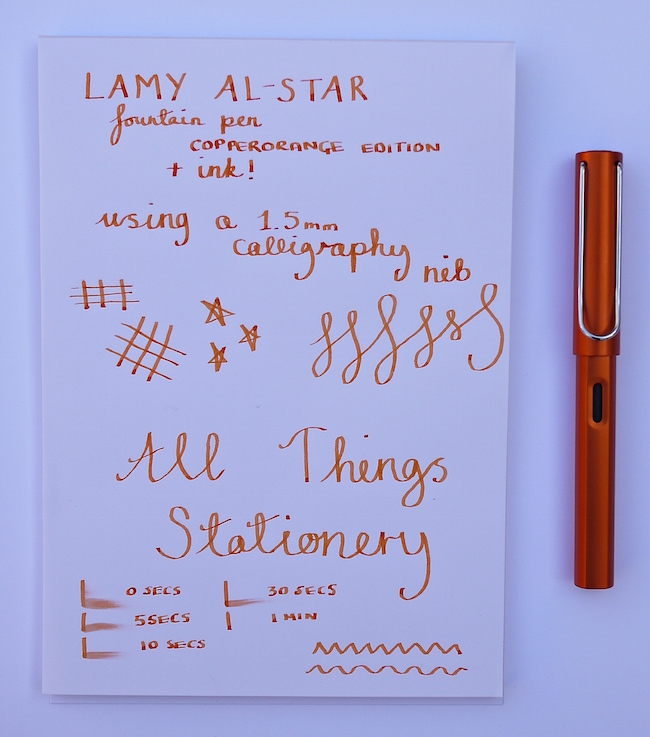 After writing THIS POST, lots of people were lovely enough to suggest some fountain pens I’d like to try… One of these was the Lamy Al-Star, and when Bureau Direct offered to send me one to try out, how could I resist?!

Well, my first impression was that although it’s a larger pen than I’d usually go for, I do love the clean lines and the classic design. The colour is cool too! I also like that the grip section is slightly see through, which means you can see the ink flowing through when you first insert the cartridge. 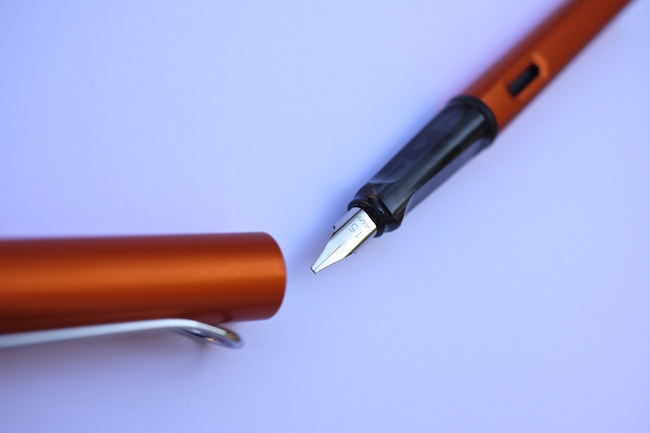 Ok – so bit of a confession -and I realise this makes me a TOTAL idiot… For a couple of minutes I was trying to get the cartridge in, and thinking “you really need to push these hard!” and then (after watching a video) realised I was inserting the wrong end. Talk about being a newbie! Gah… Anyone, once I’d turned it around, it popped in with not too much effort and I could see the ink flowing through and after about a minute I was able to write.

Normally, I would always post the cap on a pen – I think it’s suits my personality to keep everything neatly together, with no chance of losing the cap! But with this one, as it’s a bit bigger, I found that it was much heavier and the balance was off. So un-posted it is. I also found that I was gripping the pen really hard! Although that’s definitely down to me being a fountain pen newbie, rather than the pen itself. That should stop once I relax into it a bit.

In the spirit of going outside of my comfort zone, I asked to try a calligraphy nib. This one is 1.5mm wide. I normally go for nibs as fine as I can get so this looked a little intimidating! 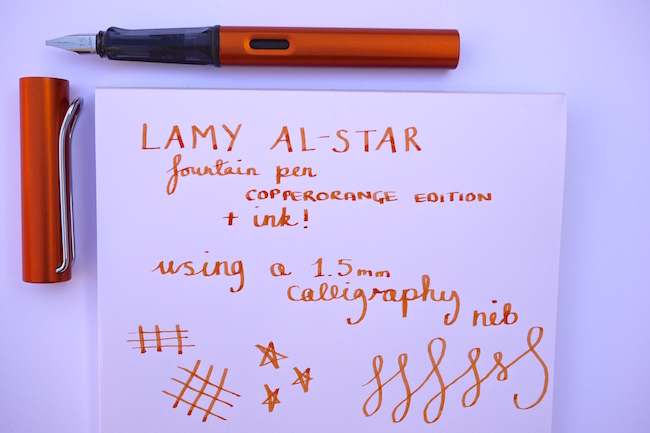 Wow – SO smooth!!!! I love how this pen feels. It encourages much bigger writing than normal for me, and actually when I tried some really small writing, the nib skipped a bit. But this may be because it’s a calligraphy nib and I’m not holding it properly… It’s comfortable to hold, writes consistently and I’m enjoying getting to grips with that nib. 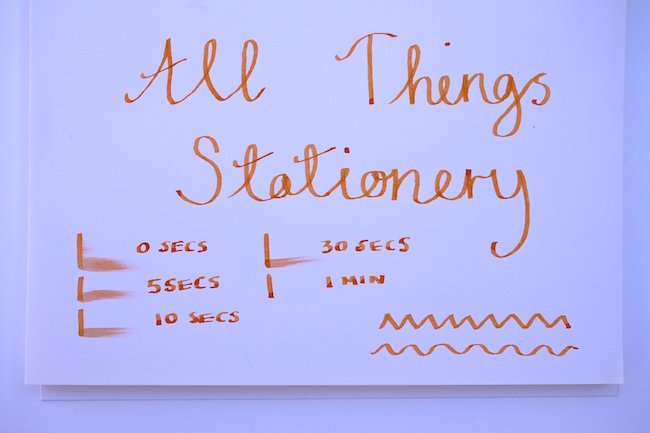 I had kind of decided before I tried this that this ink wouldn’t be for me, and when I first put the cartridge in, it came out much darker, and browner. After a minute though, the ink lightened and then once it dried it became this brighter orange colour, which I much prefer. I really like the light and shade you can see, especially when writing in capital letters. I tried it on some Clairefontaine Triomphe paper (which Bureau Direct also sent me, as it’s an ideal partner for fountain pen ink) and I’ve no complaints. I did some smudge tests (above) and it was well dry after a minute, which is good considering how wide the nib is.

Thumbs up! Yes, it is bigger and bulkier than I’d go for, which I think will take some getting used to, but for a reasonably priced fountain pen, I don’t think there’s much to criticise. I’m a little bit worried that I will get “in” to this whole fountain pen thing now… But for now, I look forward to testing out this nib a bit more, and getting to grips with the convertor, allowing me to use other inks in it – wish me luck!

You can get yourself a Lamy Al-Star at Bureau Direct for £20.95, and a pack of 5 ink cartridges in the matching Copperorange shade for £1.60.

I was sent these items free of charge by Bureau Direct for the purposes of this review, but I have done my very best not to let this affect my opinion.

If you didn’t clean the pen first, the orange ink would darker at first . Lamy tests their pens with blue ink. You need to clean a new Lamy pen (really, any new pen) before you add ink.

94% Game: Things you find in a pencil case beginning with M?

How do I plan my week? Seeso Graphics Weekly Planner