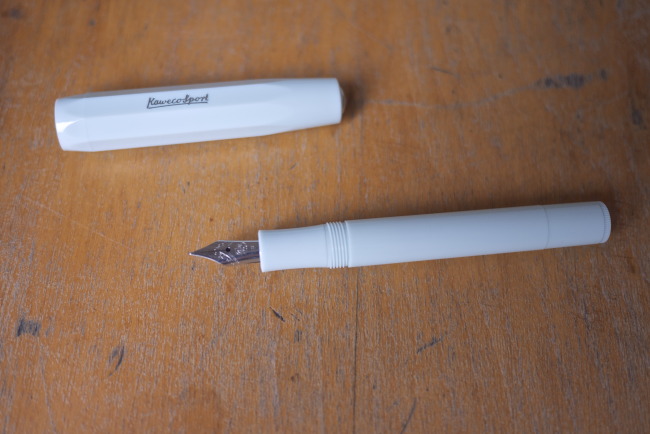 I don’t think I’ve really used a fountain pen since school. I’m not sure why, I’ve just never really felt like I HAD to get one. I think a lot of my stationery choices are design led, and to be honest, I think fountain pens often look quite dated and “luxury” and just not very me. That is until I saw reviews of this pen by The Well-Appointed Desk AND From The Pen Cup, and I had to order one!

I’m afraid I don’t know a huge amount about fountain pens, so I can’t give too much of a technical review, but here’s my attempt. 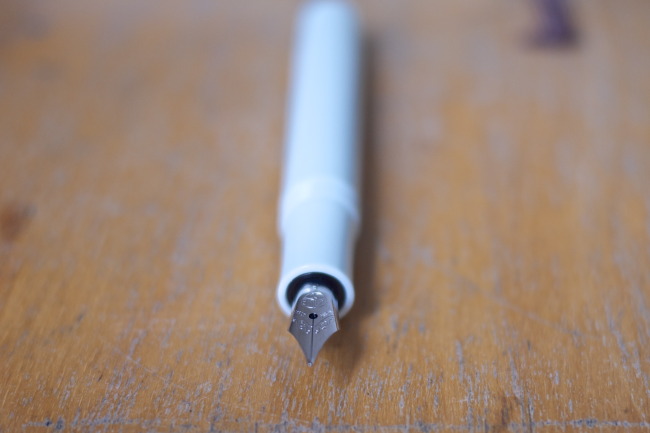 I ordered it in a fine nib. I always go for as fine a pen as possible, but I didn’t want to go for extra fine as I know I’m a newbie and I feared it would be scratchy. I also chose not to have a clip, as I wouldn’t use it and I think it looks nicer without.

Firstly, it looks amazing. I love the 1930s design and it comes in my favourite colour, mint. So much of what I own is this colour (kitchen cupboards, bedroom blinds, bed quilt, bathroom walls, the mug on my desk right now… I could go on – in fact, in our house it’s called “Tessa colour”) so that alone makes it a winner in my book. But further than that the design is beautiful, simple, and classic (but not dated!). I especially love the typography on the packaging of the pen and cartridges. I think I especially like the pen box as it looks like it could be make-up packaging! 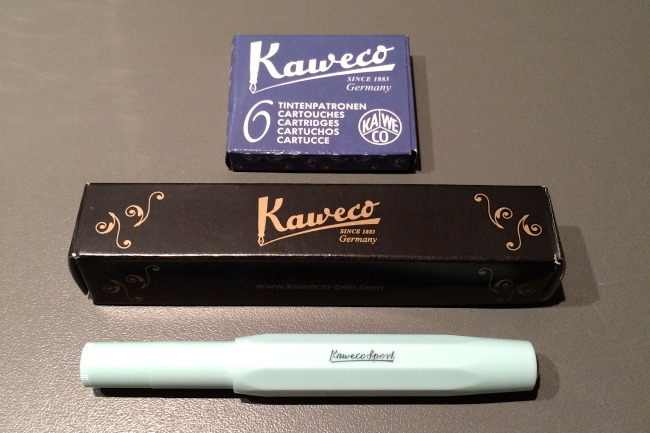 Next, to using it. It feels good. I mean, I don’t have much to compare it to as yet… But I know that it’s smooth and I like it. The line comes out a little wider than I was expecting so perhaps I should have gone for extra fine. But I like that it makes me write carefully and neatly. I think I’m being overly aware of it at the moment so I have been holding the pen quite hard, so I’m hoping I’ll relax into it. I think it slows me down a little so it’s probably not a pen for every day use – more for special occasions like writing in greetings cards. It’s small, so great for carrying around, and incredibly light. In fact, so light that I prefer to use it with the cap posted on the end. 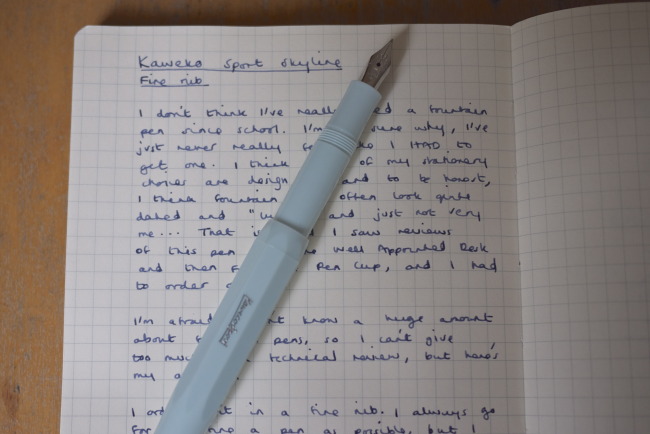 I chose the blue-black Kaweco ink. It has grey and purple tones and I really like the colour. It didn’t bleed through the page, even though I gather ink often does in Moleskine notebooks, which I have been using. 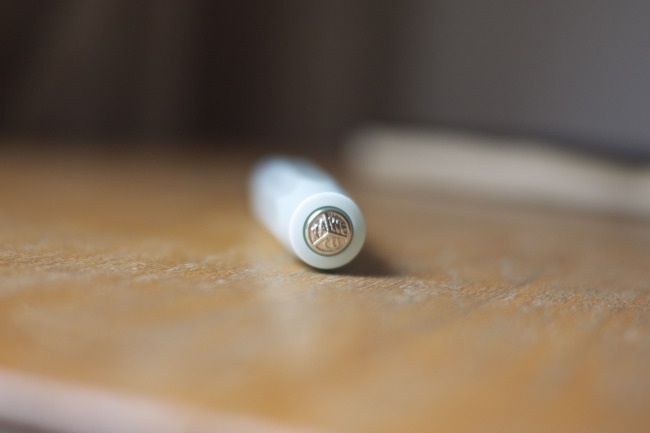 For something so good looking, so well designed AND functional, it’s at a relatively low price point. I got it from Fontoplumo for €16.95, and FYI if you check out The Well Appointed Desk review, there may be a discount on there too).

For a first go at fountain pens – I think I’ve chosen well. I look forward to showing this one off on my desk!

Great review! Glad you like the pen. The color is SO COOL, in more ways than one!!

Very nice review! The more you use fountain pens, the lighter your touch will become. You purchased well because you can buy replacement nibs for Kaweco pens, i.e. you can find an extra fine nib if you want. Another great option, if you decide you really like this pen, is to visit a pen show and have your fine nib ground to a stub nib by a nibmeister. I too like extra fine tight lines when I write, but my most favorite pen/nib of all is a Pelikan M215 with a medium steel nib ground to a stub. It’s a nice sort of calligraphic effect that gives you beautiful line variation and yet the fine part of your line is still nice and crisp.

You also did well in that Kawecos are a fantastic value. And you can also convert them to eyedropper-filled pens if you really like the fountain pen thing, so that you can use bottled ink (in gazillions of cool colors) and the pen holds MUCH more ink this way and is also WAY more environmental friendly. I think there’s even a mint-colored ink in the Diamine ink line. Check out Cult Pens as I think they may carry it.

You should also take a look at TWSBI pens. The TWSBI Mini, in particular, might be a good option for you. TWSBIs also have exchangeable nibs that range from extra fine all the way to broad and stub/italic nibs. They are piston fillers though (my favorite pen filling method) so you have to use bottled ink.But the best part is that the barrel is clear so you can see your very cool ink sloshing around inside and you also know when your pen is almost out of ink so you can refill it.

Wow Lori, you really know your stuff! This is so useful, thank you!!! So many great suggestions, I’ve kind of been trying not to get into fountain pens because I gather it can become quite an expensive hobby! but this is all very tempting…

Thank you but I’m no expert, just know what I like. I’m so sorry, but you’re already into the fountain pen world. There is an underlying sentiment that we fellow fountain penians tend to suggest to those trying to sneak over the line, and one that I’m stealing from someone at the Fountain Pen Network: “So sorry about your wallet.” 😉

Lamy Safari and AL-Star (same pen parts but different body) are great options for trying different pens and nib sizes. My AL-Star is how I first realized that I LOVE stub/italic nibs, even though I tend to prefer the tight lines of an extra fine nib. I’ve since had three of my nibs ground that way.

There are several U.S. resellers that sell ink samples so that you can try different inks on different papers to see what you like. I don’t know if Cult Pens does this but I’m guessing that if they don’t, there has to be a U.K. reseller that does.

I’ve written a lot of blog posts but haven’t posted anything as I can’t seem to make a definitive decision on a blog name. I’ll let you know when I get it going as I’d love for you to visit.

I can’t believe you don’t already have a blog! You clearly know your stuff – and much better than me! Get on it, I’d love to read it. Let me know when you do! And thanks for the info, I’ll have a look at those Lamy ones.

Funny that you think the box looks like makeup packaging – the Gutberlet family (who own Kaweco) have another business – that makes cosmetics!

My last birthday present and a reason to visit Paris