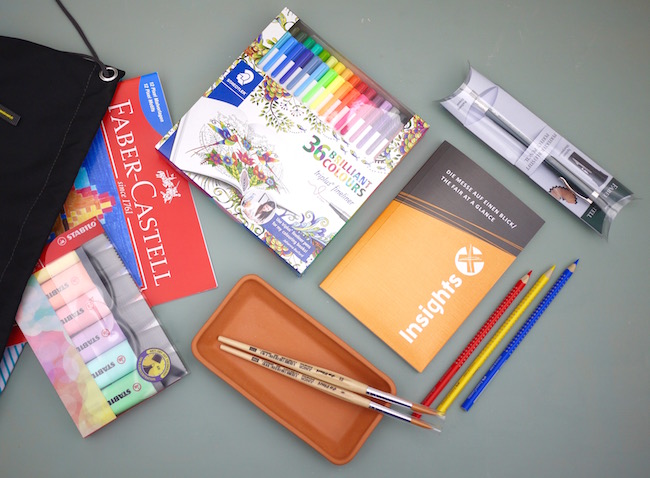 Friday and Saturday before last, I went on a stationery adventure! I headed over to Nuremberg, Germany to attend the Insights-X stationery trade show. I hadn’t heard of the show before they got in touch with me, but it ran for the first time last year and as part of their 2nd year, they were holding a blogger’s day which I was very excited to be invited to.

So on the Friday evening I arrived in Nuremberg, found my hotel and settled in with a pretzel and beer (when in Rome…), and rifled through the bag of goodies which had been waiting for me when I got there. Between that bag and all the stuff I got given at the show I ended up with so. much. swag. A tiny, tiny proportion of that is represented in the photo above. I have so many new things to review! Some from brands I know really well, and some from new ones. 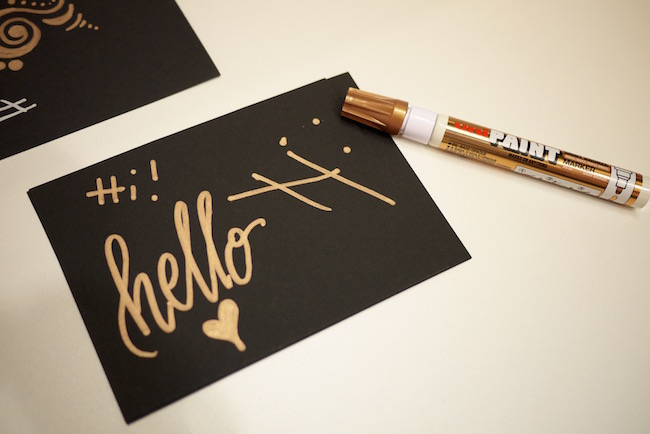 On Saturday morning, it was such a pleasure to meet Azizah from Gourmet Pens, Stephen from SBRE Brown, Dries from The Pencil Case Blog and Matthias from Bleistift in the hotel lobby for breakfast. It’s always great to put faces to names, especially when you’ve followed people online for years. And it was good to know I’d be spending the day with some really lovely, and fun people. After breakfast we headed off to the show. To be honest, at this point I was a little worried we would be there too early, but as it was, the show was way bigger than I had anticipated and even a whole day wasn’t long enough to properly explore the whole thing! It was *quite* different to the London stationery trade shows that I’ve been too.

I thought it’s probably best to go through some of my favourite stands from the show, and then give some mentions to other brands/particular products that caught my eye at the end. So, here goes… 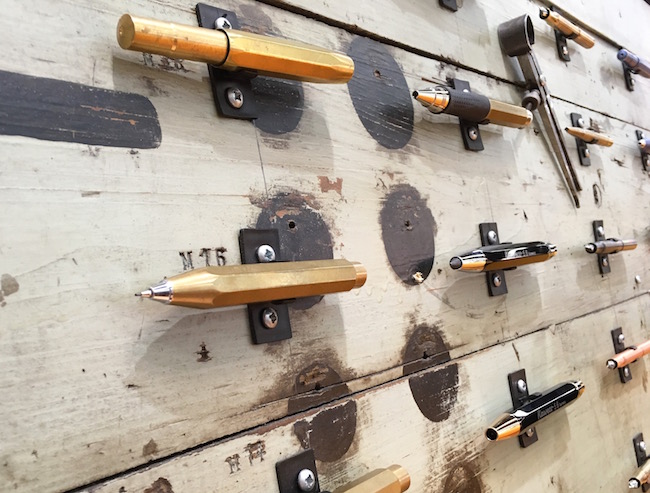 If you’ve followed me for any length of time, you’ll know that I love the Kaweco brand. I carry one of their pens with me everywhere. The Kaweco brand was the first stand we came across as we arrived, and it was so well done. The aesthetic of the stand was right up my street, using old factory equipment to create an industrial feel, which matches their range of metal pens perfectly. 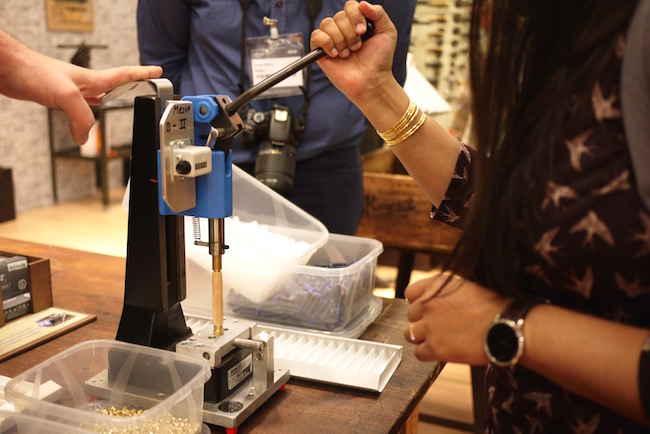 So not only was a bowled over by the display, but we then got the opportunity to assemble our own Kaweco Sport, using machines to put the final touches together. Here’s Azizah doing hers, and the finished result… 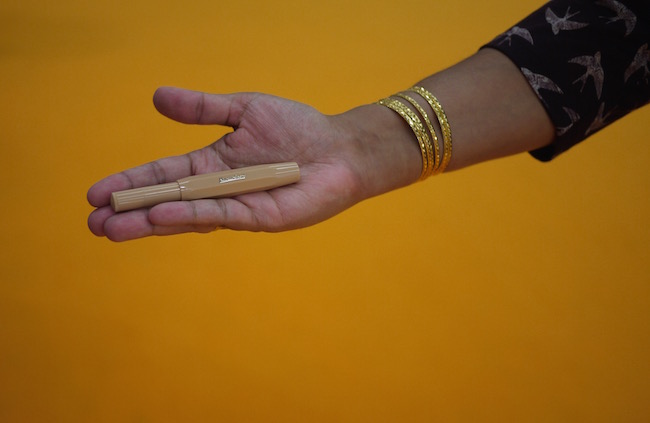 A limited edition of 300 apparently!

Also, if I’d’ve had time (a theme of the trip…) I could have done a tour of the Kaweco factory, which like many of the brands at Insights-X, was based close by. 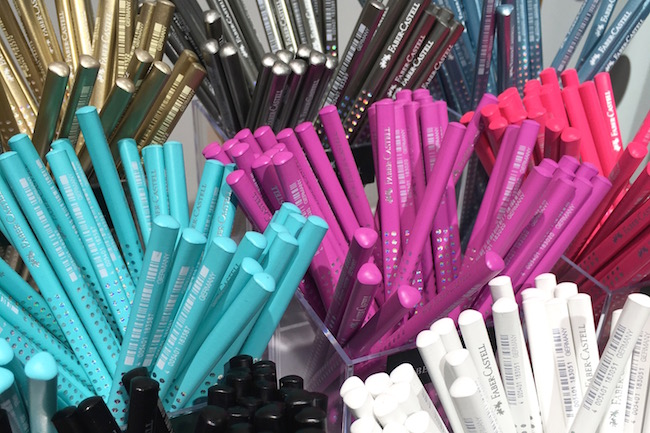 It was no surprise that Faber-Castell were at the show, as they are another brand based close to Nuremberg. Their stand was big and impressive, showing all the different ranges, from the kids colouring in pencils, to artists pencils and high end writing instruments. A couple of their new products were highlighted to us; the Karlbox and their new colouring in system. 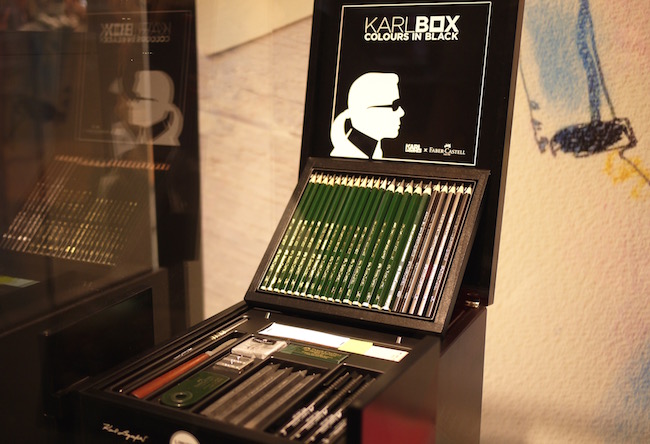 The Karlbox is about as cool as you’d imagine. The top layer holds graphite pencils and accessories, and the lower drawers are grouped by colour, with a mix of pencils, pastels and pens in each. 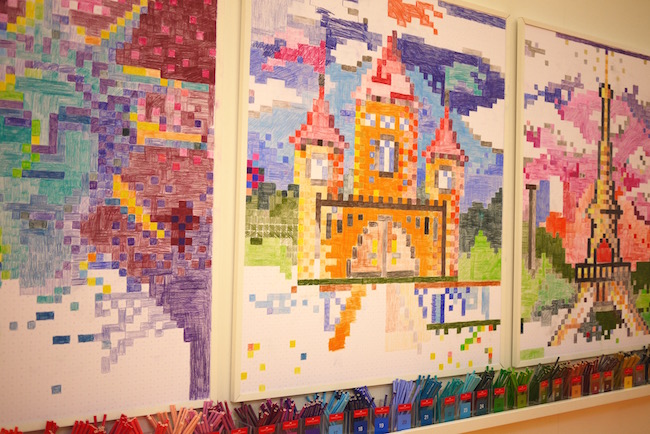 The Pixel-It colouring book is a pretty genius new way of colouring in. It’s a cross between paint by numbers, dot to dot and colouring in… That’s how I made sense of it anyway. The pages of the book are grids with numbered squares, with the numbers relating to a certain colour of Faber-Castell pencil. The picture emerges whilst you’re colouring in the squares – or the pixels – of the picture. Not only is this clever because it keeps kids (or adults) entertained for longer, but from a business perspective, it also means you have to buy Faber-Castell pencils to make it work. Plus, it’s rare to see such an innovative idea when it comes to colouring in, which has been the same for… well, ever! 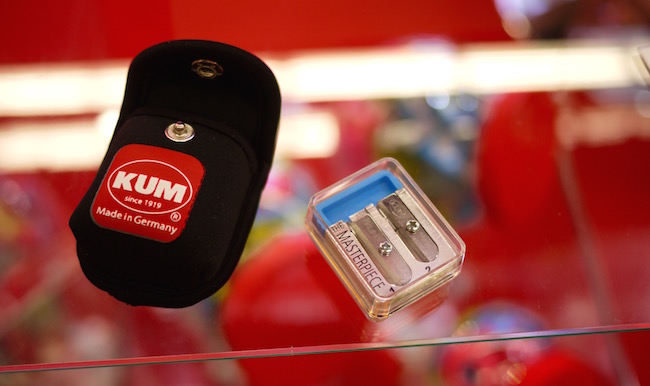 Yet another company based in the south of Germany, and I think most famous for their sharpeners. Especially the Masterpiece, which everyone went crazy for last year because it creates a super long point in 2 stages. It was actually really interesting to speak to the lady at the stand who explained that they can’t bring out new products very often, as the casts that the sharpeners are made from cost from between half a million to 1.5 million euros to make. Luckily, I don’t think they have to innovate too often as their products are pretty amazing. In fact, they can’t keep up with demand for these particular sharpeners at the moment. 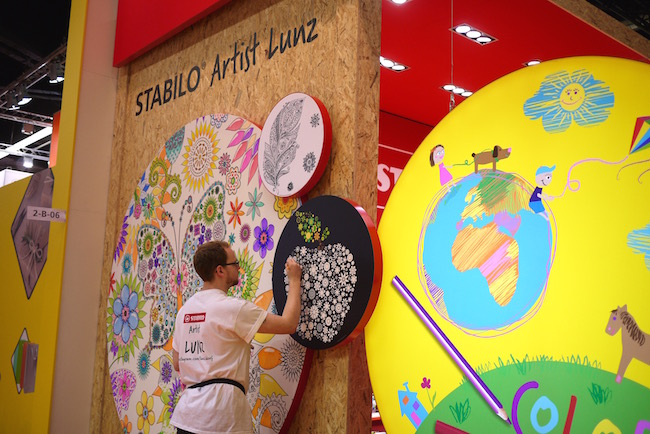 Another stalwart of the industry, Stabilo’s stand at Insights-X was certainly the most colourful! Previously, for me anyway, the most iconic Stabilo product is their highlighters, which have been in every office I’ve ever worked in, and so I was excited to see to their new pastel versions of these (which you can see in the first picture in this post). I also hadn’t really associated them with rollerballs and fountain pens before but they had some really fun, colourful ones on display, which I was coveting. 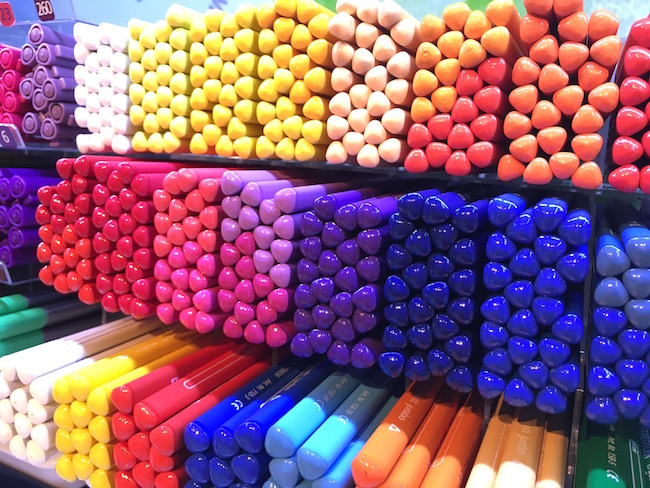 The last of the big ones that I visited, and another one based in Nuremberg. I’ve always associated Staedtler with fineliners and colouring pencils, but I hadn’t realised that they also made Fimo – the modelling clay. When my husband and I were students, for a while he lived right near a massive art supplies store and on rainy days we’d go and buy Fimo and make bizarre models… Fond, weird memories that I’d kind of forgotten until now!

Well, that sums up some of the show… But also barely scratches the surface! This will probably sound stupid, but I hadn’t really realised until I got there that Nuremberg was such a stationery hub – I had no idea that so much was still manufactured in the area, and it was really great to see the pride that all the companies take in the fact that their products are made in Germany. There were some other brands and products which I saw and just wanted to mention: Super 5 – a fountain pen brand I hadn’t heard of before, with simple designs and a reasonable price. And an apparently genuinely waterproof ink. Online – a brand that’s not made it to the UK yet, but a fairly well known pen store in Germany. Buntbox – recycled card gift boxes, in all colours and several different sizes. A simple, but great idea.
As well as other stands that I missed, there were also loads of workshops which I wish I’d had time to try, like hand lettering and notebook making. I guess if there’s a next time, I’ll certainly make sure I spend longer there!

I’d like to say a massive thank you to all everyone at Insights-X who organised a great trip and a super fun day for all of us bloggers.

It was great. I could have spent days there.
Thanks for the link to my blog.

Great photos. Great stationary is not only pleasing to the eye, but also handy for home and the office! Thanks for sharing,
Elllie
http://www.scribbledirect.com/en/products/outdoor-notice-boards/

Wow… what a fantastic event. It sounds like Heaven on Earth! 😀

I’m first Kaweco will be arriving in the next few days. Staedtler are my go-to for fineliners and colouring pens at the moment. Germany certainly has come great manufacturers.

Book Review: Cut It Out! by Poppy Chancellor